西比尔·科拉·布兰森夫人（Lady Sybil Cora Branson）[2]，原姓 克劳利（Crawley），生于1895年8/9月至12月间[3]，卒于1920年8月或9月[4]，是格兰瑟姆伯爵罗伯特·克劳利与伯爵夫人科拉·克劳利的小女儿，玛丽与伊迪丝的小妹。By her sister Mary, she was the sister-in-law of Matthew Crawley and the aunt of George Crawley. She would also be the maternal aunt to Marigold by her second eldest sister, Edith. She was married to Tom Branson, with whom she had her one and only child, a daughter named after her, Sybil Branson.

Sybil was described by Mrs. Hughes as "the sweetest spirit under this roof." Sweet tempered, caring, and politically ambitious, Sybil was liked by everyone, despite her differences in beliefs and interests. She did not believe in social expectations and treated the staff as her equals. Sybil was very compassionate, helping the servant Gwen with her dream to become a secretary. Sybil always treated others with kindness and respect, even when she was not obligated to do so.

“ My beauty, my baby. ”
—Cora saying her last words to Sybil on her death bed.[来源]

Sybil was very beautiful, with her beauty rivalling Mary's. Sybil shared some physical traits with Mary, one being their dark brown hair, and shaped eyebrows. Otherwise, Sybil had pale pink full lips, a long face, and dark blue eyes with curves. Daisy and Mrs. Patmore teaching Lady Sybil how to bake.

After receiving notice of the death of Tom Bellasis，one of the young men she actually enjoyed conversation with and with whom she used to dance，Sybil could no longer stand waiting around for the war to finish. After telling Isobel that she wanted to do real work instead of meaningless tasks， Isobel suggested Sybil become a nurse. Before she left，Isobel suggested that Sybil should learn some basic skills，like cooking and how to make a bed.

Sybil asked Mrs Patmore and Daisy for help. This seemed like a big task，as Sybil couldn't even properly fill up a kettle. She left for training shortly after and Cora realised that this was something she needed to do.

By 1917 Sybil was fully trained and felt useful for the first time in her life，saying that she could never go back to her life as it was before the war began.  </tabber> <tabber>|-|Marriage=

After the Servant's Ball，Lady Grantham told Lord Grantham she had written back to Lady Sybil. Lady Grantham wanted the family to visit Lady Sybil and Tom in Ireland. She also wanted Lady Sybil and Tom to come to visit Downton，and she doesn't want to be separated from her first grandchild. Lady Grantham also admitted to Lord Grantham，that this wasn't the outcome that she wanted for Lady Sybil，but it is what has happened and the whole family must accept it. Lady Sybil returned to her family home with her husband. The family learned she had found her place in her married life，and she longed for Tom to be accepted by her family. Tom developed a close friendship with Lady Sybil's cousin，Mary's husband and the family heir Matthew Crawley，and then Mary herself. <tabber>|-|Married Life=

Sybil and Branson returned to 唐顿庄园 in 1920 before Sybil's grandmother Martha[5]，so they met her，and it is known this was before Sybil had given birth; however，it is unknown as to whether Martha approved of their marriage. Lady Sybil and Lady Mary discuss Sybil's new life in Dublin.
Sybil planned to resume her nursing career once the baby was born. She had seemingly found her place in her married life with no regrets of marrying Tom，but back at Downton she felt a sense of safety，and longed for Tom to be accepted by the world she had always known. She confided in her sister，Lady Mary，all of this. Sybil and Tom both went to Eryholme for a picnic before Edith's wedding. Sybil encouraged her sister Edith before her wedding and tried to comfort her when Anthony Strallan jilted her at the last minute. Edith shrugged off the comfort of Sybil and Mary，"Look at them!" She said to her mother，Cora. "Look at them. Sybil pregnant，Mary probably pregnant. Go away. I mean it，GO!"

Tom Branson had been involved in the destruction of private property （a home like 唐顿庄园 was burned by Irish rebels） and had gone to meetings where they planned this. Because of his involvement，the police were looking for him and he had to flee Ireland to go to 唐顿庄园. He left Sybil behind to close up their flat，but he took the last ferry so she could not come to Downton before the next morning. Robert was enraged at this，because he had left Sybil，a pregnant woman，alone in a land that was not her own. Tom felt a great deal of guilt over this. When she arrived safely the next morning，Tom was incredibly relieved and they passionately kissed in the Great Hall of 唐顿庄园. Sybil found out that he went to those meetings and was hurt that he had kept it from her. Her father was able to save him from going to prison but on the condition he could never go back to Ireland. Sybil was not entirely disappointed at this; she had missed her childhood home and knew it could offer them peace and safety until the baby was born. Lady Sybil and Tom Branson at Lady Mary's wedding in 1920. Sybil is pregnant at this time.
Before she was due to give birth，Mary went to see her，where they discussed the issue that her and Tom's child will be christened as a Catholic，and that the christening will have to take place at Downton. Mary told Sybil that she doesn't need to let the baby be baptized as Catholic as it is her child，too，though Sybil stated that she doesn't mind because she loves Tom so very much. Before leaving so she could rest，Mary replied that she will help her to fight over the christening when the time comes. This was the final significant conversation anyone had with Sybil.

Sybil entered labour and began to show early symptoms of pre-eclampsia[6]，which was correctly diagnosed by Dr Clarkson but ignored by Lord Grantham and Sir Philip Tapsell，who also believed that taking her to a public hospital would be far too much of a risk to Sybil and the baby.

文件:Lady Sybil， Tom Branson and their baby daughter.jpg
Lady Sybil with her husband Tom，and their newborn baby daughter，shortly before her death.
Lady Sybil gave birth to a baby girl. Everybody was relieved and delighted at this outcome except Dr Clarkson who saw what was coming. Tom told Sybil how much he loved her and left together with the rest of the family to let her get some rest. Only Cora stayed back and Sybil made her promise to help take care of Tom and the baby because she suspected that Lord Grantham may want them out of the family. Cora reassured her that she would take on this responsibility and went to bed. Exhausted，Sybil tries to go to sleep in the knowledge that she has paved the way for her husband and baby to be accepted in the family with the backing of Mary and Cora.

After delivering the child，Sybil began to experience a series of severe fits and spasms due to the eclampsia[7]，and was unable to breathe. Her mother and father，her sisters Mary and Edith，and brother-in-law，Dr Clarkson and Sir Phillip Tapsell were present at her bedside while her husband held her as she suffocated and died. Sybil's death was widely felt across the family. People such as Cora，the servants，Violet and most importantly Tom were greatly affected by her demise. </tabber>

Lady Sybil was very fond of her parents; Robert and Cora. To this end she was afraid of disappointing them and took a long time in considering Tom's offer，even if she was reluctant to live like she did before the war. Tom mentions that Sybil loved her father with all her heart in order to convince Robert to attend the christening of her daughter. |-|Mary=

Lady Sybil seems close to Mary，as she shares about her and Tom's secret. She discusses her married life with her and promises she's happy. Mary kept in touch with her after her marriage and later on accepted Tom far more easily than the others. |-|Edith=

Lady Sybil does not seem as close to Edith as compared to Mary. However，she was the first whom Sybil told that she did not want to go back the old world and had a plan which was what she wanted even if it was a point of no return. Sybil also encouraged Edith to move forward too，citing that she had become a much better person than she was before the war began. Edith helped search for her after her brief elopement with Tom Branson. Edith may also have been slightly jealous of Sybil because she was happily married，when she was not，but she was also grief-stricken like the rest of the family when Sybil died. |-|Matthew=

Sybil was generally of a positive opinion of Matthew. She seemed to develop a slight crush on him after he saved her from the rally. She，however，refused to elaborate on Mary and Matthew's relationship when Tom inquired. |-|Servants=

Everyone was of a positive attitude towards Lady Sybil. Even Thomas was fond of her as shown by his grievance at her death. |-|Gwen=

Gwen’s dream is to become a secretary，she wants to come out of service and make a better life for herself. She’s breaking every rule - women didn’t want to have a profession and work in an office so she is part of the new wave of female independence coming through at that time. She is helped by Lady Sybil，who does all sorts of things that Robert would be appalled by to help Gwen get interviews and write letters. Sybil really compromises her position but they are a similar age and growing up in a time of great political change which has affected them both. Gwen’s determination to leave Downton is not just a whim. She has saved her wages in order to buy a typewriter，which she keeps hidden above her wardrobe. The desire to work in an office is very new and exciting to her and something that her friends back home probably haven’t even thought of doing yet. It isn’t all plain sailing for Gwen though and Lady Sybil but eventually they manage it and Gwen is offered a job from a man whose mother w 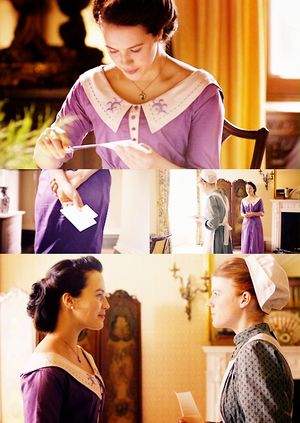 模板:Main Hired to be the Crawley family chauffeur，Tom Branson inspired Lady Sybil to get involved in political causes，and over time they developed a romantic relationship，later marrying despite the reservations of her family，and living in Dublin，Ireland where Tom gets a job as a journalist.

By Christmas 1919，they were expecting their first child and in 1920 returned to 唐顿庄园 to visit the Crawley family and attend Mary's wedding. Months later，Tom unexpectedly arrived at Downton after fleeing Ireland without Sybil，leaving her to arrive the following day. Due to the trouble he was in，Tom had been forbidden from returning to Ireland，so he and his wife began living at Downton. Sybil later gave birth to their first and only child，a daughter，but dies shortly afterwards of eclampsia with Tom and her family at her side，leaving Tom，the Crawley family and their staff shocked and heartbroken. Tom named his daughter after his late wife，christening her Sybil，after the wife he so dearly loved and missed. </tabber>

“ We can just lie back and look at the stars. ”
—to her husband.

“ I don't know why we bother with corsets. Men don't wear them，and they look perfectly normal in their clothes. ”
—to her sister，Mary Crawley

“ I know what it is to work now. To have a full day，to be tired in a good way. I don't want to start dress fittings or paying calls or standing behind the guns. ”
—to her sister，Edith Crawley

“ It's doing nothing that's the enemy. ”
—to her sister，Edith Crawley

“ We need peace，and safety. Downton can offer us both. ”
—to her husband Tom Branson on why they should stay at 唐顿庄园.