Master George Matthew Crawley (b. between 9th and 30th September 1921) is the only son of Matthew and Lady Mary Crawley. He became the heir presumptive to his maternal grandfather's title and estate following his father's untimely death soon after his birth. He currently lives with his maternal family (including his grandmother, aunt, uncle, and his cousins, Sybbie and Marigold) in Downton Abbey, which he will inherit upon his grandfather's death.

George is heir presumptive to Robert's title and estate and the Crawley family fortune. His claim comes through his father's line as his paternal great-great-great grandfather was a younger son of the 3rd Earl of Grantham.

“ Say "Hello" to your son and heir. ”
—Mary presenting their newborn to Matthew[来源] 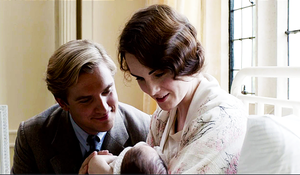 With his parents.
Lady Mary Crawley was holidaying with her family at Duneagle Castle in September 1921, the Scottish estate of her cousins the MacClares. When she began to feel that she was not well, she decided to go home alone. She came back to Downton early the next morning but immediately went to the hospital, realizing when she got off the train she was in labour a month early.

George was born soon after. His grandmother Isobel was there, as was Doctor Clarkson. His father came later. When Matthew went to Downton to relay the news to the rest of the family and return with them to the hospital, he was run off the road by a truck he neglected to see, as he was still overwhelmed by the day's events. Matthew was killed instantly by a blow to the head while Mary, smiling, held their baby boy.

In February 1922, George was half a year old, his mother was still grieving over the death of her husband (whom she saw in George, as did Isobel), and did not bond closely with him, instead leaving him in the care of nannies. When one, Nanny West, suggests to Mary a walk with her son Mary declines and kisses him. She even refers to him as a "poor little orphan". Anna, Mary's maid, replies that George isn't an orphan because he's got his mother and an orphan has no mother. Mary remarks that her child isn't poor either.

Nanny West favored George over his cousin, Sybbie, because of their respective parents, George being the future Earl of Grantham while Sybbie was the daughter of a former chauffeur. After overhearing Nanny West nastily insult Sybbie, Cora fires her on the spot and forbids her to stay with her grandchildren. She looks after George and Sybbie herself while waiting for a maid to come andfor the night. George and Sybbie eventually get a new nanny.

Later when Tom says to Mary that she has to find an interest she answers that she has one, her son, or will be interested in him soon. During a conversation with her grandmother, in which Mary is told by Violet that she must remember George and that he needs his mother very much, Mary explains that she knows that but she doesn't think she may become a very good mother because of Matthew's death. Eventually though, she gradually learns to love her son very much and be a good mother, spending time with him, his cousin, and uncle in the nursery. She even feeds him herself.

Isobel also visits him in the nursery, and learns to be close to him even if she was first pained to see Matthew in George. She decides that George could call her Grandmama so Cora could be Granny. Later, George "meets" Charles Blake when he and Sybbie are brought into the library to spend time with their family. Mary asks her son to "wait that mama puts her cup" but Charles offers to take baby George in his arms. During Rose's ball, in Summer 1923, Mary explains to Lord Gillingham that her destiny is to save Downton for George "by spending every penny and every waking minute holding it together".

George and his cousin Sybbie get rescued by his uncle and Sybbie's father, Tom Branson from a fire that breaks out from Edith's bedroom. Mary is shown to love her son by holding his hand and calling him darling. She later spends more time with him after she finishes riding in the horse race. Marigold later joins him and Sybbie in the Downton nursery after Cora convinces Edith to bring her home. The three of them watch with their nannies as the family leaves for London for Rose's marriage, and then again when the family goes to Brancaster Castle for the grouse season. He, Sybbie, and Marigold also help decorate the Christmas tree and attend a subsequent party.